‘I got an admit from my dream University for Fall 2020. I was over the moon with joy… And then, the world exploded.’

This story of Mukesh, a FALL 2020 applicant, (shouldn’t be mistaken for his namesake who is now dead, coz tambaku chabane se), will resonate with millions of prospective applicants, as they see Coronavirus ripping their dreams apart, of being on campus in the coming August.

To add to the sorry state of all the Mukeshs in the house (raise your hands), as if the virus wasn’t bad enough, nearly every major financial agency, be it IMF or Fitch Ratings, are predicting a deep, global RECESSION in the subsequent quarter, that makes the 2008 version seem like a dry run. In the poker-faced life of current times, COVID seems to be saying: ‘I see your 2008, i raise you 2020. Go all in, Humans. Or Die.’

In the last three weeks, close to 15 million Americans have filed for unemployment benefits. It is also estimated that the global job loss can escalate to 40-45 million, if the virus is not contained quickly. How and when a recovery will happen, whether it will be V-shaped or a long drawn one,  is as good a guess as the Professor’s next move on La Casa de Papel. In such a spiralling-outta-control job market and the experts signalling that the WINTER is already here, Mukesh’s dreams of a smooth MS program and finding a cool job with a million dollar pay cheque that puts Tony Stark to shame doesn’t seem to be working out all right.

“The very best-case scenario is we rapidly bounce back and we get close to something where we were before. Personally, I think that’s highly unlikely. The shock from the virus is going to trigger a broader economy-wide recession,” said Jesse Edgerton, an economist at JPMorgan.

To me though, Mukesh’s situation is a deja-vu of my own time as a MS candidate, in 2009.

A year earlier, in 2008, the stock markets had crashed, and the recession in the US had gained significant ground. Unemployment hit its peak in June 2009 with nearly 14.7 million Americans out of work. And there I was, in August 2009, catching a flight to Gainesville from Mumbai, to become part of the hallowed Gator community at University of Florida, despite repeated warnings of my parents, friends, relatives and muhalle wali aunty, that it was not the best time to go to the US. My defence to their never ending discussions on how will I pay back my education loan if I am not able to find a job or an internship in US were nuanced, logical opinions like ‘dekh loonga’, ‘kuch kar lunga’, and ‘job to lag jayega’.

That myth crumbled as soon as the Fall semester began, as I competed with at least gazillion other Indian graduate students, on everything from part-time jobs, roommate hunting, assignment partners, career fairs, networking events, garba nights, booty calls, and grocery runs to the neighbourhood Gujarati stores. With the stiff competition came an avalanche of rejections while applying for internships, part-times, RA and TA positions. At the house parties, I would hear stories of seniors having 2 or even 3 jobs by the end of their graduate term, and here I was getting dissed by dining hall managers for being too qualified to wash utensils at the back kitchen. By the end of the first semester and after hundreds of rejections, it became abundantly clear that I needed a strategy to crack a job in a recessive market. One, which did not include going to sleep after 8 bottles of Budweiser on a Monday afternoon.

What I did for the rest of my graduate program was to carefully plan my moves. I prepared a roadmap of the areas where I needed to improve and began working on my shortcomings. After diligently sticking to the plan for more than two semesters, things slowly changed for the better. By the fall of 2010, I became the one of the first graduate students from the department of mechanical engineering to receive an internship offer. For the next six months, I relocated to the wunderbar Germany for my internship, which proved to be a turning point in my career and beer-drinking capacity. Once I was back in the US armed with the internship experience, I started getting a lot more interview calls. By the end of my term in 2011, I had multiple full-time offers to choose from, and ended up sticking with the Germans.

The biggest takeaway from my journey as a graduate student in the US in the midst of the Great Recession was that a clever strategy and unwavering belief in one’s ability will reap rich dividends. Once you figure out your strategy, stick to it. Believe in it. Make love to it. Until you end up owning the recession, and not the other way around.

As I see Fall 2020 and 2021 applicants staring at a global recession, I am reminded of my time in Gainesville, and of the uncertain but fiercely competitive job market that existed in the wake of the Great Recession. And as a recession survivor, I can tell you guys, things won’t be easy peesy for you when you eventually reach on-campus. The struggle is REAL, bro. There will be lots and LOTS of rejections, heart-breaks, disappointments, near misses, too close to the finish line situations. Sometimes, it will truly suck. And that’s OK. You will eventually get through this. That’s what the class of 2009 did, and came out stronger.

So, it’s important to start working NOW on a roadmap of how to beat the upcoming COVID-induced recession.

Here are some of the steps that I took to beat the recession in 2008, and you can take as well when you start your term

Upskilling is the way forward

Although upskiling is a no-brainer to survive during any economic downturn or otherwise, most people are as averse to it as logic is to Swami Nithyananda. The reality is that upskilling is as concrete and an effective step to come out shiny and new from a recession as is social distancing for coronavirus.

I understood the need of upskilling early in my first semester as I found out that most of my courses in Mechanical Engineering involved quite a bit of coding in MATLAB. Back in those days, I used to dislike, no wait…. hate.. I used to HATE coding or anything to do with programming. Thus, even though I had all the time in the world before I started my graduate program at UF, I never invested it in learning computational tools like MATLAB, Excel or Python. It took a beating on my first semester grades, which motivated me to upskill massively in the subsequent semesters. The result was a 6-months internship offer in summer, and later a full time position of a Computational Fluid Dynamics (CFD) Engineer at one of the foremost wind turbine manufacturers in Germany. Thus, with effective upskilling, I not only found a job in a recessive market, that paid me handsomely but also got me introduced to the cutting-edge technology of CFD in renewable energy.

Hence, my two cents to the prospective graduates are: Upskill like CRAAZY! Learn new technologies. Try out interdisciplinary courses from different online platforms. Master the cool hacks of Data Science and Data Analytics. Maybe, find a new language course on Coursera and learn to speak the Parseltongue. Upskill. Upskill. Upskill. Ok, I think you get the point. Nuf said.

Be a LINKEDIN Wizard

An exceptionally large majority of the graduate students I have interacted with in my 4 years of professional practice of mentoring graduate students, do not understand the ART of a creative LinkedIn profile or invest time in crafting it to make it appealing to a recruiter. At best, I have seen students copy pasting their entire Resume/CV on their LinkedIn profile, with a profile picture that was originally meant for jeevansathi.com. The truth is you have to do so much more than that to extract a mere ‘Hi’ from recruiters looking to hire on LinkedIn, let alone having a conversation with them on the opportunities in the organization and how do you fit in.

In order to make recruiters from your DREAM companies stay on your profile for more than 5 seconds, you need to ACE the LinkedIn game.

Networking is a kind of second job (without pay) that takes up at least half of your time. It’s not something that just happens. Too many graduate students think that towing the line, getting published, and having an almighty Ph.D. is going to lead to a bunch of great opportunities. But this just isn’t true. If you want to get ahead, you have to start building your network. You should spend at least half of your time connecting with as many other people in the field as possible and following up with them consistently.

Use the time right now to identify and research the network chains, events and communities that you will be constantly engaging with for the next couple of years.

The worst thing that can happen to you is that when someone Googles you, they don’t find anything about you online. If they search your name and nothing shows up, you’re not important and you’re a risk. Take away the risk. Control the conversation. Offer something. The easiest way to do this is to build up your online presence, by either starting a blog, or sharing cute cat videos. Have your pick.

Look for opportunities outside US

In the summer of 2010, I was applying to at least 10-15 internship positions every day. Some replied within a week saying they can’t go ahead with the application due to visa eligibility issues, while some kept me in limbo for years. Some just never answered. This reality was shared by nearly everyone in class of Fall 2009.

After restricting myself to searching only US-based roles for a semester and the resulting mounting pile of rejection letters, it was clear to me that the approach ain’t working. So, I started looking for opportunities in other regions like Europe and Asia. Through effective networking with some of my former Indian colleagues, I was offered a position in Germany. My roommate came to India for his internship and later found a full time role with the US headquarters of the auto giant.

Unlike a lot of other graduate students who concentrated only on US based roles, WE started looking for opportunities outside the US. By the end of summer, quite a handful of us started our CPT term in a different country. Thus, my suggestion to the Fall 2020 batch is to not restrict to any particular country for internships and full-time positions and take a more diversified approach.

The author can be reached out at [email protected] 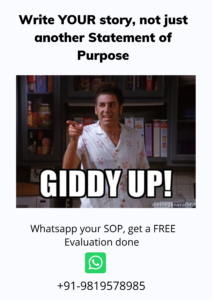 Search for your interest